I know I shouldn’t, but I have a soft spot for the clichéd phrase ‘You couldn’t write it!’ or ‘You couldn’t make it up!’ If you prefer, as sports commentators say, ‘You couldn’t write a script like it!’ As a writer, it gives me a warm feeling that, sometimes, life can imitate ludicrous coincidence found in less credible novels and invoke Deus ex machina. We know this is a plot device used by writers who have a seemingly unsolvable problem which is suddenly resolved by the unlikely or unexpected intervention of some new event or character.

It often appears in football, as if an unseen hand has scooped up the player- or the ball- and made something happen you wouldn’t have believed possible, against all odds. Of course, I’m not referring to the Maradona or Henry Hand of God. I mean that, sometimes, the drama is so breathtaking and so unreal that it’s hard to believe. Remember the 2005 UEFA Champions League Final? I’ll never forget it. Perfect example.

Add into the mix the underdog as hero or protagonist. More to the point, the little man, unlikely to be a hero. He shouldn’t even be there. He has no chance: his ultimate demise is inevitable, but he will battle bravely until the last breath. Multiply it by eleven, plus manager, and you have Lincoln City. Create an impossibly powerful and angry antagonist, a wounded Goliath needing to prove strength in combat, and you have Arsenal.

Of course,the reader is a neutral, otherwise there will be natural bias.

Yesterday, Premier League fifth place Arsenal played  lowly Lincoln City: The Gunners Versus The Imps. And that is how it was, the mighty men against the little fellers.

Until half time, with Arsenal putting on pressure but Lincoln looking like they might just be able to snatch a goal when their opposition became a little sloppy in play, the dream was alive.

However, what was really tickling me in terms of the graphic novel was the players’ contrasting physicality. Take Arsenal’s Alexis Sanchez. He’s a vital player, scores goals galore for club and for his Chilean national team. A big, strong forward, barrel chested, he looks like he works out in the gym for six hours a day. 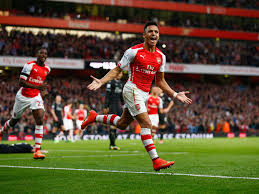 Now let’s move to Lincoln’s forward, Matt Rhead. He’s not athletic. He could be working out in the pub six hours a day.

But what a hero, what a role model. He and his team mates took on the might of Arsenal, the maimed animal, having been thrashed twice by Bayern Munich to chalk up an aggregate of 2-10 which meant their exit from the Champions League. Little Lincoln didn’t look jaded in green. They were calm, focused, took the knocks and put in the tackles. It was a stunning first half where everything might have been possible, only down by one goal at half time.

Of course, the inevitable happened in the second half. Lincoln are a non-league side. There was no way they were going to hold out against physically honed professionals for 90 minutes and when the goals rained in, they lost 5-0.

But the incredible story line was that they were there at all in the first place. That 9000 Lincoln fans, ferried by 53 coaches and a chartered train, should take their place in the Emirates Stadium and watch their small team combat against the mighty Arsenal is no small achievement. They believed that Wembley could be possible and, for the first 45 minutes, it was. There were moments where it could have been a different outcome.  In the 30th minute, Nathan Arnold had a shot saved by Petr Cech. We held a collective breath. If only…

Lincoln’s goalkeeper Paul Farman was voted Man of the Match for his bravery and impressive efforts against an Arsenal onslaught in the second half. Plus, he wore pink. What a hero.

For me as a storyteller, this is Roy of the Rovers stuff. The underdog with no chance braves it out against the invincible mighty men who, of course, cannot be allowed to show mercy. Consider Arsenal’s financial backing, the wages and the transfer fee of each player; consider the  fans’ recent railing against the manager, and then think of the strong and loyal unit which comprised the Lincoln boys. What an incredible tale of  desire and commitment, tussles and tension. In such situations, I always think of Camus’ words:

Everything I know about morality and the obligations of men, I owe it to football. (Albert Camus)

And so it was with Lincoln. No, they were never going to win, if the outcome of the game is solely how success is judged. But what a trajectory, what dreams, what cliff- hanging tension, what a story line. And like any tale where the underdogs lose, they are also the victors in terms of their heroic achievement. They came, they played and they might have conquered but there was little chance of it. Their team spirit, their eagerness, their zeal, their shared goal could be said to outshine the inconsistent results of their glorious opponents. The fact that they were there at all and they made a good drama of it makes the story one in which they can exit the field of combat with their heads held high. And of course we will now want to read their next instalment.