It is autumn now. There is something new, something sharp, a scent of change in the air every morning and the fields are damp. A soft mist rises and leaves are already falling from trees. Autumn is a time when, if it’s not raining, it’s good to go for a walk and breathe cool air, watch crows whirl and pull clusters of blackberries from the prickles to take home and cook into something delicious, courtesy of autumn.

Or it’s a time to sense winter’s first ice on the wind and contemplate the bite of the cold, whether the central heating will work this year and then start to chop firewood.

Summer months are long and fickle, some days gloriously warm, some much less so, but although the weather controls much of what we do – and it’s at this point that it’s appropriate to remember those people whose lives are caught up in storms,  hurricanes, avalanches and forest fires – we are lucky that we can decide whether we allow the weather to dominate our moods and actions.

Pathetic fallacy is wonderful in literature –the storms on the moors in Wuthering Heights, Frankenstein‘s violent lightning, Ophelia’s broken willow branch in Hamlet –but of course, it is a fallacy. Nature isn’t a metaphor for human emotions.

I went for a walk last Thursday, a three mile stroll along the country lanes, and the rain was drumming on the hood of my coat, but it was exhilarating. It’s interesting how the imagination works in time with the rhythm of squelching footsteps, and how new ideas form when we force our heads to become empty. Ted Hughes’ brilliant poem  Thought Fox explains it so well: prints begin to form in the mind and then on the blank page at the point when we don’t force them.

My thoughts during the walk drifted to think about people who will find the winter’s temperatures challenging. People who live in damp accommodation, who can’t afford heating bills. Many people have nowhere safe to live: communities who travel are in need of warmth and welcome; those who are homeless are really at the mercy of the elements. For those of us who are fortunate, winter is about log fires, toasted crumpets, steaming mugs of hot chocolate and it is precisely that feeling of being safe, warm and comforted which we all need. As the cold weather approaches, wherever we live in the world, adequate food and clothing are important, shelter, someone to visit and talk, to help break the monotony of loneliness.

My garden has a great quantity of fruit this autumn and I have a freezer full of stewed apples. I’ve given bags away, to friends, relatives, the Amazon driver, anyone who will benefit. My neighbour has a bowl of Bramleys at the bottom of the lane, for anyone who wants them. And that really is a metaphor, sharing our abundance with those who have none.

When winter comes, being cold is part of the fun. We all hope for snow: not the snow which is hazardous to drivers, but the white drifts which pile high in the hills and we can walk for miles, our breath like mist, and go tobogganing on tin trays and come home with red cheeks and melting clumps of ice on our boots. Winter is not to be feared, as long as we look out for each other.

Of course, if we are lucky with our health, another spring will come around. Crocuses will peep through the hard soil, the pale sun will deepen to a rich yellow and then summer will be with us again. There will be more apples to share, more long evenings around the barbecue with friends and more days strolling on the beach with that special person.

So each moment, whether warm or cold, is to be welcomed, embraced and enjoyed. We are fortunate if we can watch drizzle from the warmth of a room, behind a window, our feet too hot against the radiator.

I spend a lot of time writing during the winter months . My desk is in front of the window and I can see pigs, sheep, fields, trees, brambles. The pylon. I spend a lot of time not looking out of the window. On the computer screen, the thought fox is pressing its little prints on the keyboard and there are pictures, images, ideas, wild and whirling words. But when I glance up and see the rain battering the glass or the grey sky hanging like a tarpaulin, I realise I’m lucky. I can always go and put the kettle on, sit in front of the fire, have a cup of tea. 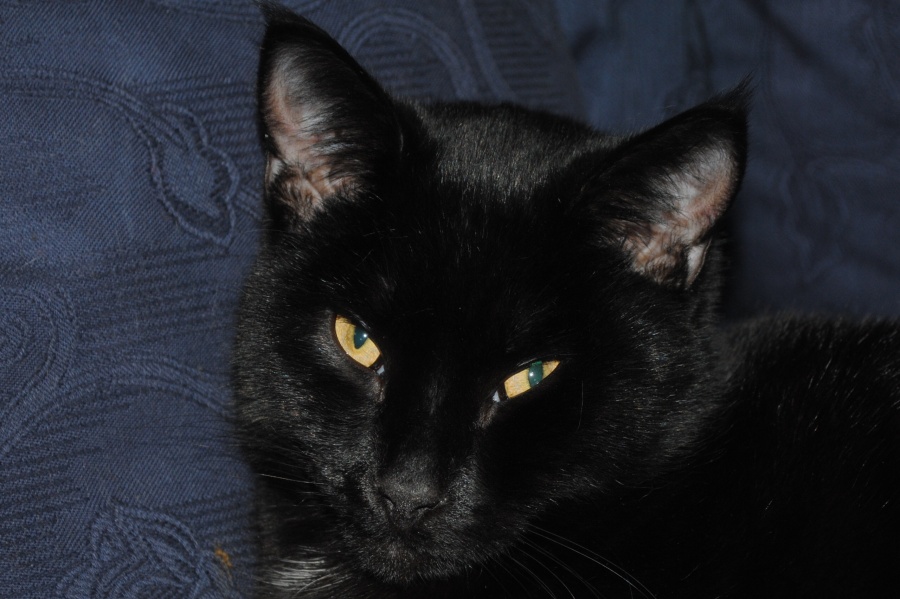 When I moved house, I took my three cats, each in a basket, in my car. On the way, I told them they were going to a lovely place where they could run amok and have fun to their hearts’ content. Colin and Pushkin settled quietly. But Majick was not a happy cat.

Majick is about six years old. He came to me from a cat rescue centre when he was almost two and it was love at first sight. Affectionate and obstinate, a cat with his own ways and his own mind, he ruled the other cats in my house with determined grumpiness. Pushkin is my cat, a familiar, always on my knee, but she’d jump off if Maj wanted the space. Colin Feral always deferred to Majick when it came to the feeding bowls. Majick is Boss Cat.

Majick was always called Majick. Probably Magic. His first home was with a Romanian lady in a flat in Plymouth and he’d never been outside. He would even use the toilet in her bathroom. He was a cat with dignity and good manners. She was broken hearted to leave him, but she took him to the cats’ rescue, along with his bowl and toys and written instructions about the tastes and habits of  ‘Magic cat.’ So, of course, he came to me and was pampered and spoiled and, as soon as he smelled the outdoor air, he developed wanderlust, which I encouraged. I’d often see him half a mile away in the bushes, doing his own catty thing. He’d stay out all night. Sometimes he was away for days.

So when we arrived at the new house, I put the cats  in an upstairs room with food and toys while  furniture was being bundled about downstairs. Pushkin went to sleep. Colin found a hole in the stairs and covered himself in cobwebs. Majick made his feelings clear by pooing everywhere.

As the weeks progressed and the cats had to stay indoors, Majick peed in places no cat should pee. He began by weeing on my yoga mat. He then urinated in the vegetable rack and I had to wash pumpkins and onions several times.

I’d never been to Waitrose and thought I’d try out the local one. I parked the banger in between the BMWs and the Jags and in I flounced, selecting a few organic vegetables and a packet of quinoa. I queued properly and paid for my purchases, then pulled out my recycled bag, a strong plastic one that  I’d bought in a Leclerc somewhere in Brittany, and I was about to stuff the shopping in. The smile on the cashier’s face froze and her nose began to twitch. I could see and smell why. Majick had peed in the shopping bag.

He was not a happy cat and it troubled me every night as he pressed his nose to the window and howled. ‘Just three weeks, Maj, and you can go out,’ I promised.

Then the  time came. We went out together into the garden, me with the three black cats following and, at first, they were tentative, sniffing everything, staying close to my heels. Within a few minutes, Pushkin had caught a mouse, brought it in, dropped it and it was running around the kitchen. I failed totally to coax the mouse out from under the cooker with a piece of vegan cheese, so Big G cornered it with a cardboard box. ‘Got him.’

The mouse shot up his trouser leg and lodged somewhere between his thigh and his belly button. Somewhere warm and safe, no doubt. I watched, laughing inappropriately, as he ran outside doing the hokey cokey and came back with his jeans around his ankles and the good news that the mouse was now safe in the field next door.

The cats began to feel more comfortable outside. It was sunny. But Majick had a gleam in his eye every time his little nostrils sniffed the clean air. The next day, he didn’t come back. Six days passed: I thought the worst and hoped for the best. Then one evening, he sauntered around the corner, fatter, happy and demanding food. I picked him up, hugged him, but his eyes were still on the hills.

Three weeks ago, he climbed on the wall, looked at the sheep in the field next door and his eyes glazed over. His bead nose sniffed freedom in the air and I thought, he’s off. And off he went.

I expected him to come back after a few days, but I haven’t seen him since. Each morning I walk towards the misty fields and shout ‘Majick’, and listen, but there’s only the call of crows and the grumble of the sheep.

I’ve asked about, talked to neighbours and farmers. Apparently, lots of feral and farm cats live around here. I’ve seen a tabby and a wiry ginger tom, but not Majick Cat.

I believe he might come back. It wouldn’t surprise me. I don’t let myself think of him lying still under a combine harvester or lost down a distant lane. He may have found himself a new home and, if so, he will be well loved. I imagine him running wild, a rabbit hanging in his mouth, hunkering down in a field as the sun rises. I hope he’s happy.

One spring morning, he may saunter back. Or it might be a bit cold one evening in winter and he’ll think, I’ll go back to that place where they have a warm fire and they feed me. I haven’t given him up yet. I’ll recognise the yowl, the persistent howling at the window which orders me to let him in and rip open the cat food at once. And I know I’ll go running outside, pick him up, hug him stupidly and yell ‘Oh Maj, where have you been?’ like I always do, and he’ll stare into space over my shoulder and put up with me kissing his neck then, as soon as I put him down, he’ll run to the food bowl and look up at me, frown and wait.

He’s Majick cat. I hope he’s out there somewhere. I hope he’s having a cat whale of a time. Colin doesn’t miss him. He’s Boss Cat now. And Pushkin monopolises my knee and the food bowls and she is quite happy. But I haven’t given him up, not yet. He’ll be back…