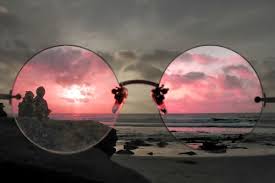 Christmas is over and we have finished celebrating the arrival of a new year. It’s now a time when we can look forward to the wonderful gifts 2018 can bring. We all hope for health and happiness for ourselves and for those we love and we wish for world- wide peace and an end to discrimination, disease and destruction. We consider changes to our lifestyle, wanting to be instrumental in making positive developments. We decide to eat healthier food, join a gym, spend more time outside, and help others. Such plans are admirable: we all know of people who will run a marathon in 2018, land a new job, find the perfect partner, raise money for charity or, simply, be more content with their lives. It doesn’t really matter if it’s January or July, looking forward confidently and with optimism is a good thing.

Yet we spend so much time looking back. Christmas time is a good example. We all love White Christmas, the archetypal festive 1950s film showing how perfect life used to be, and the Irving Berlin song dates back to 1942. We sit around the dining table, reminiscing about previous Christmases, missing people who are no longer with us, and old childhood memories of past years are stirred up and savoured. Many people yearn for aspects of bygone times, when food tasted better, everything was cheaper, we were less focused on commercialism, and people’s lives were less complex and perhaps in some ways happier. I remember as a teenager hearing a woman in her seventies talk about the Second World War with fondness. I was horrified. What about rations, bombs, the sacrificed lives? But she simply looked misty-eyed and said ‘Ah, but you had proper neighbours then. We all looked out for each other.’

I wonder if nostalgia is a bad thing: if we are always looking backwards through rose-coloured glasses, does it prevent us from looking forward clearly and determining our own destiny? But then, there are things we learn from the past. Life experience enables us to make decisions focused on a knowledge of likely outcomes. But the future is ours to determine, so why would we want to hold on to memories which have long gone? Perhaps that is it: like an old photograph, a letter or a school report found at the bottom of a drawer, the pages yellowed and the ink faded, perhaps the past provides us with a soft fuzzy feeling that makes us happy. 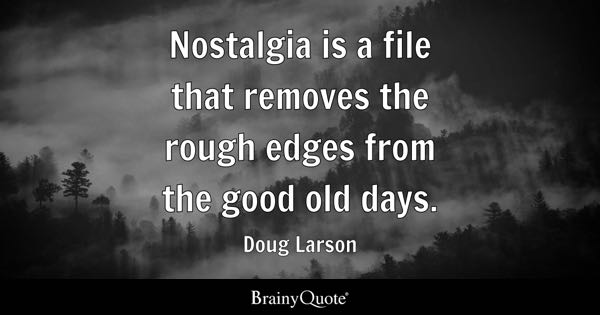 Finding joy in nostalgia is not always easy to achieve. I have returned once or twice to the place I grew up and several times to towns and cities I have lived in. Much has changed and I feel no impetus to relive the past there. Yet I spoke to someone recently who went back to a town they left just over a year ago and they were filled with a sense of having belonged, having grown up there, having developed and become the person they are today against a backdrop which was important, which was in some ways formative. Memories such as those are tangible, important and cannot be taken away.

Music and the media are quick-fire ways to start a nostalgic conversation. Hearing The Clangers theme tune takes me back to childhood. Certain rock songs remind me of adolescent mischief. I know exactly where I was when I heard about The Twin Towers tragedy. Similarly, smells take us back to happy times, whether it is the lavender perfume of Grandma’s handkerchief, the smell of hot dogs at the fairground or the aroma of Mum’s apple pie in the oven, we are transported instantly and memory is picture- clear.

But is nostalgia good for us? A 17th Century medical student first used the term nostalgia for the anxieties displayed by Swiss mercenaries fighting away from home. It was thought of as an illness, caused by demons. The word derives from the Greek nostos (return) and algos (pain), suggesting suffering due to a desire to return to a place of origin. However, modern thinking is that nostalgia makes people feel more socially connected to others.  This social connection boosts people’s positive feelings about themselves.

One of my neighbours has an old Ford Cortina she wants to sell and another neighbour longs to buy it, as it was the first car he drove when he was 18. Of course, he could own a modern car, one which is much easier to drive, more economical, but the idea of owning a defunct banger matters, quite simply, because nostalgia makes people feel good. Nostalgia is not merely for the older generations, either; I have heard twenty year olds wax lyrical about Pokémon, Beyblades, Wispa bars. People are nostalgic because reminiscing makes them feel happy about old times, and it allows us to share common feelings and experiences.

But nostalgia isn’t real, is it? Every time we recall an experience, the memory becomes a little distorted. It can be more positive, more negative; we even have the capacity to change things unintentionally. As time passes, the memory becomes further out of touch with reality and so it is hardly accurate or reliable, especially where emotions are concerned. But sentimental recollections often include anecdotes and memories of loved ones, which reinforce the social web that extends across people and across time. There is also evidence that nostalgia works towards counteracting depression. The act of reminiscing has been shown to neutralise loneliness and anxiety. When people speak fondly of the past, they also tend to become more hopeful for the future. So nostalgia can in fact be a healing and a bonding experience. 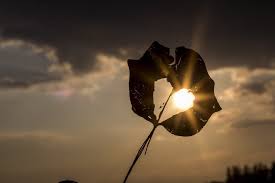 So, on that note, I’ll wish everyone the very best for 2018. But when you find yourself reflecting back on your life, on those special moments, remember that you are finding value and meaning in it. You are reminding yourself that life so far has not been unfulfilled and you are looking forward to creating more fond and wonderful memories. So, enjoy remembering the past: and here’s to the future!