… some moments are nice, some are
nicer, some are even worth writing about.

I didn’t intend to blog about politics so frequently, but the changes in the political climate in Britain at the moment are monumental and too elusive not to savour on a blog post.

We’re in a unique time where change is happening as we speak. Yesterday, shortly after the Observer reported that Hilary Benn might challenge Jeremy Corbyn after a vote of no confidence in the Labour leader, he was sacked. Since then one moment’s change has led to another; co-ordinated resignations of shadow cabinet members throughout the day yesterday, and spilling over into today – with Angela Eagle, Lisa Nandy and Owen Smith amongst the latest – hack away at what remains of the crumbling edifice of Corbyn’s authority.

Since Sunday 26th June more Labour shadow ministerial team has resigned than there are Liberal Democrats MPs – several times over. Confidence in Corbyn is so low, and despite his victory last year,  it isn’t a surprise as he has lurched from one disappointing move to another, culminating in his inability to offer any whole-hearted support for the Remain In campaign last Thursday. This scoop from Paul Waugh exposes just some of the ways in which Corbyn and his team failed in their duty to back a Remain vote.

It’s  sad but not surprising  to see the vote of no confidence in Jeremy Corbyn; he’s always struck me as the sort of man who might be interesting to share a chat and a kale and avocado smoothie with, but he’s not ever going to inspire a win for Labour the next general election. That is clearer than ever now.

Some people think Corbyn is wonderful and they will be sorry to see him go. However, since last Friday, the door has been opened to negative behaviour between people on social media and on the streets, legitimising xenophobia, racism and expressions of blind, uninformed prejudice. Pandora’s box is open.

At the same time, figures in the Leave campaign are slowly rowing back on their promises. Iain Duncan Smith and Nigel Farage have poured cold water over the idea that there will be £350 million pounds a week to spend on the NHS. Michael Gove and Dan Hannan seem to have already admitted that net migration is unlikely to fall. People will realise they have been sold a lie by the Leave campaign and the Tory right. And that’s before we even consider Johnson’s (I’m not indulging ‘Boris’ anymore) bizarre Telegraph article.

We now need an inspirational leader to counteract the Johnson and the Farage impetus. It needs to be someone who can gain voters’ trust and loyalty against a backdrop of blatant Brexit lies – the shameless betrayal of the voting public over the next few months. I’m not sure who it is but I do know who it isn’t. Jeremy Corbyn was never properly committed to a Remain vote and his efforts to back the party line have been interpreted by many as dishonesty. He is the party’s most Eurosceptic leader in over 30 years and many Labour party members blame him for failing to inspire a Remain vote last Thursday. 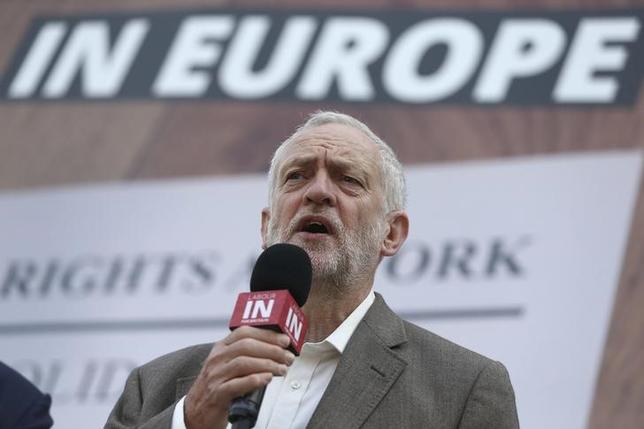 Corbyn won the leadership vote hands down in September, many fans believing him to be a principled man whose policies and ideas were an antidote to right wing hegemony. He certainly seems to adhere to his personal code of ethics but the legacy of his appointment is the leadership of  a man who treats the Labour party  as a rest home for his intransigent speeches and stubborn personal ideals.

We are in interesting times. Nicola Sturgeon says that the Scottish Parliament could try and block the UK leaving the EU. I won’t pretend to know the legal or the constitutional ramifications of such an issue, but the political consequences could be seismic. We were assured by the Leave campaign that the spectre of a second Independence referendum was simply ‘Project Fear,’ but Nicola Sturgeon has cannily waited for her moment, and many English and Welsh voters have given the SNP exactly what they wanted.

Our politics are in turmoil – and Jeremy Corbyn’s weak leadership of the Labour Party is part of the malaise. I don’t know exactly who I want to fill the gap – Hilary Benn and Lisa Nandy, both touted as potential contenders – have ruled themselves out in recent days. I know the new leader will need to be able to unite a fragile and disparate party. I know he or she will need the courage and the nous to take the fight to the Tories and hold them to account for the post-Brexit deal they plan. I know they will need the charisma and the nerve to fight a tough snap general election this Autumn, if the eventuality arises. I know Jeremy Corbyn can’t do any of this, and that’s why he has to go.

We face mounting political and constitutional crises. The government is in paralysis. The opposition is dysfunctional. Scotland may be on the verge of a second referendum. The pound has fallen to its lowest level in 30 years. Britain is nervous. Someone has to step into the vacuum – either that, or we allow it to be filled by the toxic smoke of Nigel Farage and the fug of our own fear.