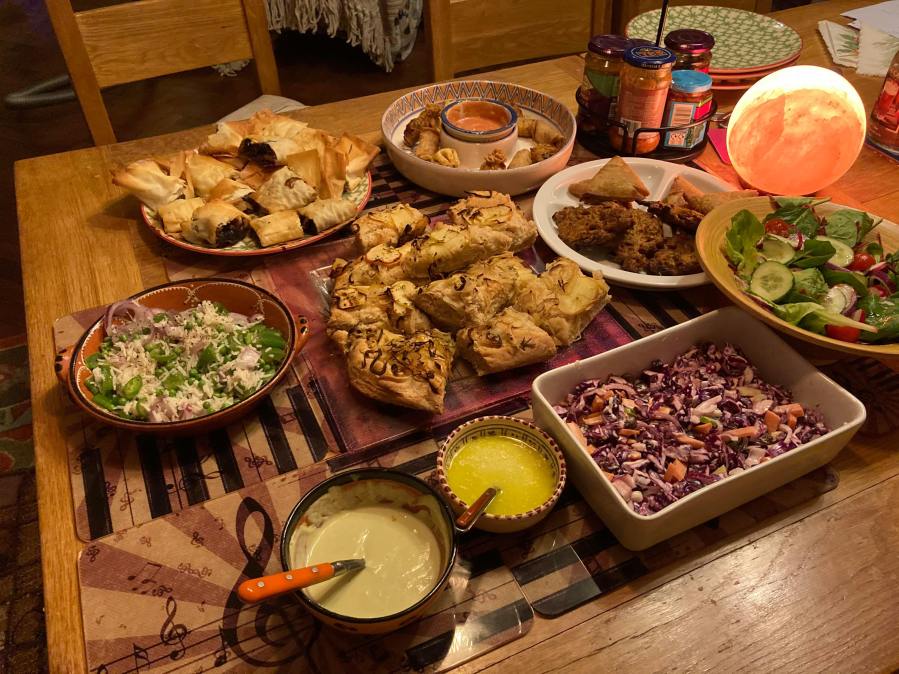 Apparently, the entire month of January is celebrated by many as Veganuary, a time when people eat vegan food for a month. Perhaps it is a fresh dietary choice for some, perhaps it is an antidote to the Christmas excesses for others, or even just curiosity, but I thought I’d share my New Year’s buffet on a blog post as a way of celebrating plant-based food. After all, I can’t invite you round at the moment.

The triumph of the buffet table was the deliciously savoury and sweet focaccia bread, topped with apple and onions. The loaf was straightforward focaccia or pizza dough, rolled out and topped with thinly sliced apples, onions, parsley and thyme, gently fried first in olive oil. The bread was cooked in a medium oven for 20 minutes until golden brown and risen. Loved by all who try it, it’s a winner.

I also defrosted some filo pastry and then I sauteed onions, garlic, mushrooms, adding chopped chestnuts and a handful of spinach, then a handful of plant-based cheese, and seasoning the lot. This was the filling for several sheets of pastry, rolled over to make a long sausage shape, then cut into chunks and baked for 20 minutes in a hot oven.

Along with a mixed bean salad with peppers and tomatoes, a green salad, a rice salad with peas, and a few dips such a hummus and some garlicky aioli, I also served a few more savoury dishes. I fried some onion bhajis in a gram flour and water paste, spiced with turmeric, cumin and coriander, and some samosas stuffed with potatoes, mushrooms, onions, garlic, peas and spices. These were served up with chunky mango chutney.

Finally, I made some dim sum buns, stuffed with mushrooms, peppers and onions cooked with garlic and ginger, wrapped in a coconut milk and flour dough and steamed for fifteen minutes. These were served up with a tangy sweet and sour chilli sauce.

I made a pan of glühwein, warmed spiced red wine with fruit chunks, and after the buffet I brought a plant-based tiramisu to the table. It was a spiced sponge, with cinnamon and ginger, covered with a whipped mixture of coconut milk, plant-based cream cheese, coffee and kalua coffee liqueur, topped with chocolate.

I’m looking forward to my next book launch in April, for Chasing the Sun, or maybe the one after that later in the year, when I’m able to invite people round, and we can share a good buffet together. It’s a great feeling, to spend time planning and making a buffet for others, then to offer a variety of finger food and watch people pile up plates with their choices and enjoy nibbles.

Next time, I may add some little curried pies or mini quiches, some mini pizzas or a sliced vegetable tofu frittata. I might also add an interesting plate of no-pigs in blankets with my own home made ‘ba-con’, an eggless scotch ‘egg’ and some salmon-free canapés with herby cream ‘cheeze’ made from cashews. Watch this space, as I’m bound to blog anything that works well enough for me to want to share it with guests at some point in 2021.

As I see it, if I can’t invite you round and offer you a plate of food, the next best thing is to share it on a blog.

With warmest wishes to you all for a Happy New Year.

6 thoughts on “Sharing my New Year’s Eve buffet with friends, in the only way currently possible…”