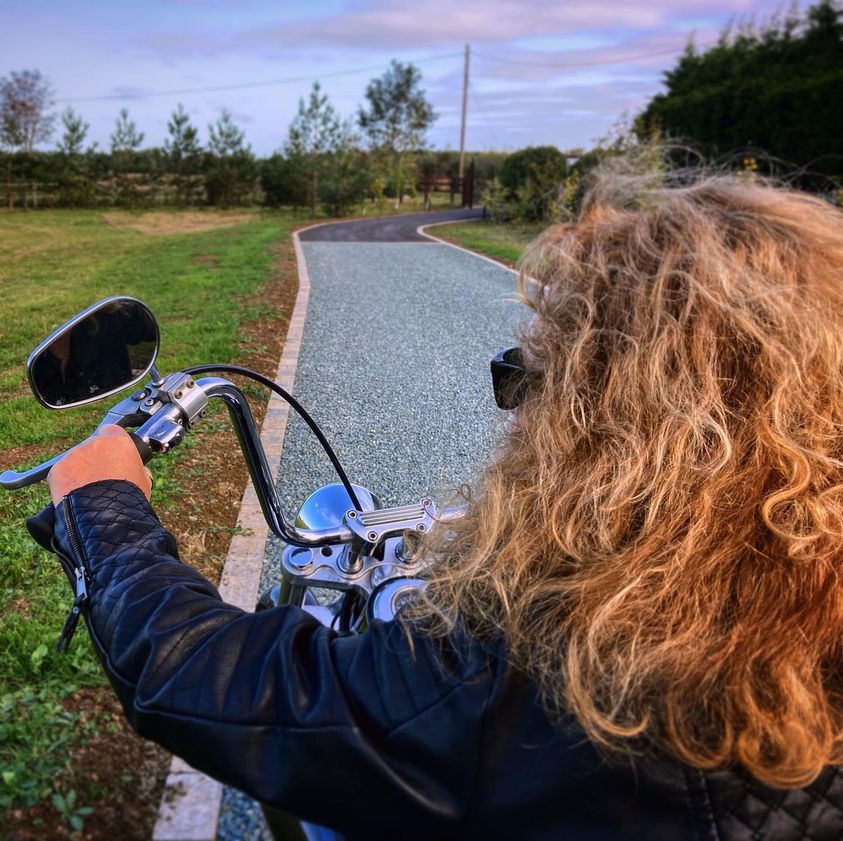 Of all my novels, this one is the easiest to cast as a film. The characters jumped out at me, from the moment I thought ‘now who would play Billy and Dawnie?’ Once you’ve read the book, think about the casting for yourself – you may come up with much better ideas than I have but, for me, the following actors work perfectly.

Dawnie Smith is a really strong character; in her wigs and colourful clothes, she is outgoing, determined and vociferous, with a kind heart. Julie Walters would play her perfectly – Dawnie can’t be suppressed, she is incorrigible and fun but she’s also sensitive, kind to others. Julie Walters would capture her mischief and she’d have a wonderful rapport with Billy, as they are both inseparable and interdependent.

Billy Murphy is Brendan Gleeson: tall, big-hearted, sociable yet his fun-loving character hides a shadowy past, which he rarely mentions. He adores Dawnie. He has a sense of humour and he is a gentle giant who keeps his Harley Davidson in the hallway and plays the drums in the spare bedroom. He is the perfect man for Dawnie; romantic, a good cook, and with a heart of gold, Brendan Gleeson would be a wonderful Billy.

Dilly Stocker is the older woman who lives across the road with her son; she is mischievous, full of fun and she adores action movies. It would be wrong to play this character merely for her stereotypical ‘older woman living disgracefully’ qualities without accentuating her loneliness, her love for her son and her sense of loyalty. Bring out Maureen Lipman here, who’d need good make-up to enable her to look older, but she is absolutely the right actor to capture Dilly’s sense of fun.

Vinnie Stocker is in his fifties, handsome and vulnerable, looking for love, having had his heart broken. Colin Farrell could do this role perfectly; handsome, naive, trusting and kind, Vinnie’s journey from lonely heart to happy man would be wonderfully played by Colin Farrell.

Malcolm from next door. Malcolm doesn’t have many friends. He is a gossip, he’s judgmental, negative and an all-round- unpleasant neighbour. He’d be played by Jim Broadbent. He has the ability to appear sorry for himself but he can be quite petty and difficult. I’d imagine he’d do a fabulous job as Malcolm, enabling an audience to feel pathos as well as animosity towards the character.

Gillian, Malcolm’s long-suffering wife is sad and lonely in an empty marriage; we feel sorry for her and, as is often the case for many characters in this novel, there is more to her than initially meets the eye. I’d choose Imelda Staunton to play Gillian. She’d have to be made to appear dowdy, but she’s such a strong performer and she’d embody the character so well.

Lester Wainwright becomes Billy’s biker friend; he’s an entomologist and an all-round nice guy. He’d be played by Tom Courtney who’d be perfect in the role of the kind man who adores his wonderful wife.

Ursula Wainwright is so warm, friendly and thoughtful, a completely generous person. I struggled to cast this one; I was looking for a German actor who would be in the right age bracket and I couldn’t find one. In the end, I settled for an American who would have the kindly face and potential to appear gentle and magnanimous, so Ursula would be played by Laura Linney.

The seaside setting would add to the British feel of the movie, on location in west Devon, where Billy riding on his Harley along the coast and across the moors would offer a great opportunity for the sense of freedom. The fresh summer sunshine and moonlit nights set the scene  for second chances and new beginnings. I can just imagine Billy and Dawnie’s story being a poignant and joyously feel-good movie.

2 thoughts on “Casting Heading over the Hill as a film”