A few months ago I went to see Macbeth in Stratford, with Christopher Eccleston playing the eponymous role and Niamh Cusack as Lady Macbeth. I was looking forward to it because I admire both actors and I thought it would be a real privilege to see them in roles that would offer exciting performances. I wasn’t disappointed. Eccleston was very much the plain soldier Macbeth, completely at ease on the battlefield but not so able to deal with real-life emotional issues: he was a ‘nice bloke’ who did his job, adored his ambitious wife, respected his superiors but very quickly found himself out of his depth. Cusack’s performance crackled with passion and the desire to seize life’s opportunities. They conspired together to kill King Duncan; she was strong and organised; he was loyal and troubled by his softer conscience. Then after the deed, he fell apart and she could not sustain life with the guilt she had accumulated. His performance as tortured hero who became a murderer and her descent into mental illness suffocated by guilt were superb. I should have loved the production. But I didn’t.

Then recently I saw the National Theatre production with Ralph Fiennes and Sophie Okonedo as Antony and Cleopatra. A simpler storyline than Macbeth, I expected to be blown away by the acting but less impressed by the play itself. It’s a three and a half hour long performance about two privileged and self-absorbed people whose love is obsessive and at times controlling and they both get what they deserve at the end. The actors’ performances were brilliant – off the scale, but I couldn’t have been more wrong about the production not gripping me. The text was construed in a considered, innovative fashion; the characters were complex and well-studied and the result was a powerful sizzling interpretation.

Eccleston and Cusack as Macbeth and Lady M impressed me greatly, but the rest of the cast didn’t. I invariably try very hard to see positives in an interpretation and I am always in awe of people who perform well on stage, but the production contained two thrilling actors and a weak supporting cast. Banquo’s extended silence as he heard that his children and wife had been murdered didn’t work, making him look like an actor who’d forgotten his lines, and his subsequent high-pitched wail of grief was incongruous. The directorial decision to cast three little girls as the witches never resembled the chilling corridor scenes in The Shining, where children are ethereal and scary. Imagine the ‘Double double’ cauldron scene, Eccleston acting his socks off while three sweet kids in pink onesies skipped around him chanting a nursery rhyme. It didn’t work at all for me, or for the complete stranger I bumped into coming out of the loos during the interval, who looked at me and grunted ‘What did you think? Bloody amateurish waste of my time.’ 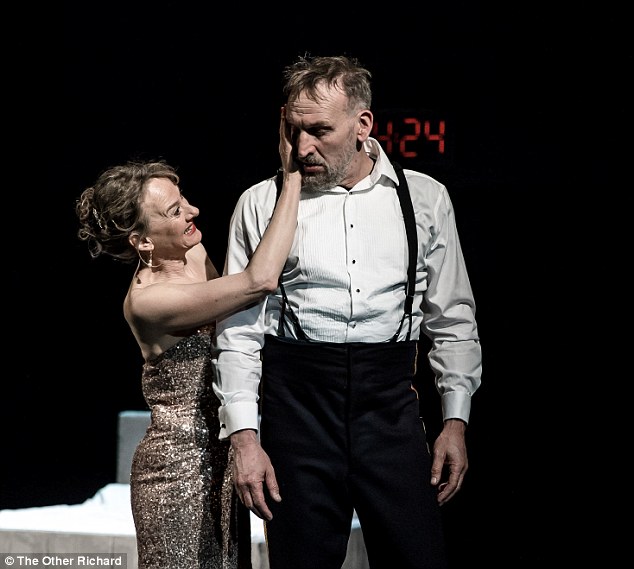 In contrast, the three hours plus of Antony and Cleopatra flew by. Although Fiennes and Okonedo weren’t immediately likeable, they impressed as complex characters both separately and together. The play ticked all the boxes: the revolving set made the action fast-paced; the opulent Egypt and contrasting business-like Rome was a clearly effective way of transposing action and place and highlighting cultural difference. All the actors, with a special mention for Enobarbus, Caesar, Eros and Agrippa, offered a wide range of emotions and were readily believable. Fiennes showed Antony’s dilemmas clearly, troubled by loyalty, caught between his brutal military life and his turbulent passion for the Egyptian Queen. Okenodo was playful, proud, imperious and controlling, occasionally vulnerable, but always fascinating. Their ability to allow the roles to consume them in performance was second to none. Antony’s intense anger, his self-hatred and his tragic destiny consumed the audience. Okenodo was incredible: her death scene came after three hours, and it is neither a short nor an easy death to portray, but her performance was measured, powerful and poignant as she infused despair and dignity into her final scene.

The director of Antony and Cleopatra combined inventive interpretation with the gimmicks that work well visually: a lavish lake into which Cleopatra pushes Eros and creates comedy; the powerful and violent war sound effects; the evocative images and crashing waves of being at sea. The play was effective as an entity; the text made absolute sense and the characters were totally credible.

Compare the successful realization of Fiennes’ and Okenodo’s Antony and Cleopatra to the predicament of two excellent actors, Cusack and Eccleston, and a supporting wooden cast acting around a wooden table. I came away from Macbeth pleased because the two main characters had been glorious, but with a sense of unhappiness that the rest was not good enough to balance their brilliance; they had endured bravely against the challenge of what was to me a pedestrian production stuffed with random gimmicks that were not joined-up in concept and therefore did not work. In comparison, Antony and Cleopatra demonstrated what happens when two great actors perform in a production where everything gels and the result is harmonious.

I love live theatre and it is very satisfying when a production absorbs me from start to finish. It is delightful, consuming and it enables me to leave the theatre feeling that in some way, my life has been embellished. It is less satisfactory when my suspension of disbelief stops during the early scenes and I start to consider the ways in which the production could be improved while it’s still playing out before my eyes. It is interesting to see how two great actors can thrill together and separately whatever the circumstances, but how much brighter they can shine when they are given a strong supporting cast and are part of an innovative production.