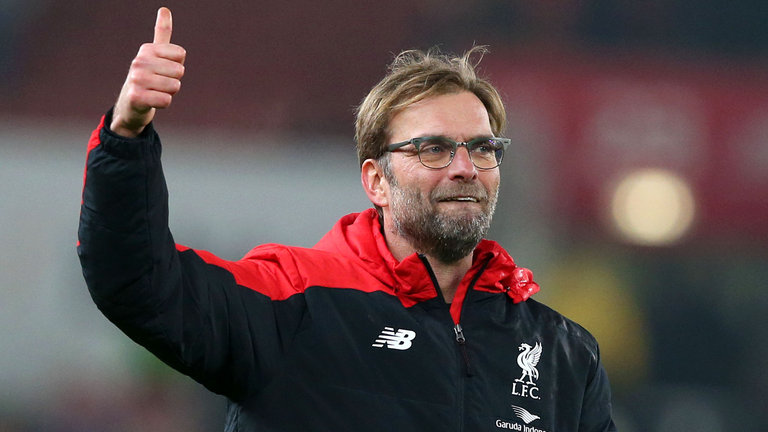 Jürgen Klopp came to Liverpool six months ago, inheriting a tired team who played slack and lacklustre football. He has brought with him a reputation, a rock star charisma, a keen and articulate intelligence and a unique sense of humour and mischief which would quickly endear him to fans. More importantly, he has brought the scent of success with him. We believe he can change things, a little at first this season, leading to the big impact all fans crave for in the future.

Klopp is changing the way his team play, imposing a demanding tactical remit. We now have more intense football which presses high up the pitch, more committed players who believe they can score goals: this is a great change from the stagnant play and the stale atmosphere in Anfield which was sadly becoming routine under Brendan Rodgers.

We hope for new signings next season, but Klopp has made a difference already, with current players such as Adam Lallana,  Mamadou Sako and Dejan Lovren noticeably upping their game. Improvements have also been made by many other players, Can, Allen, Firmino and Origi being a few names who have achieved far better form under Klopp than Rodgers.

Klopp has been honest about the team’s initial inconsistent form. He has been straight with his fans after defeats; he is always passionate and angry and committed to what we all want – results and change and the chance to have our blood pressure raised during every game with the ever-present belief that we can win.

The atmosphere has altered around Anfield. The Kop bounces and rocks; the fans have sensed the commitment and the desire which Klopp exhibits and it has affected his players and all of us who watch the games. He is infectious in his determination and desire, and every game is a game we believe we can win, whether a league match or European clash.

We believe he can do it. His fresh approach, energy, enthusiasm and passion have given us something we can believe in.

And then there is Jeremy Corbyn.

Corbyn was elected last September. Ed Miliband resigned in May after Labour had lost the last election, the majority of the voting population having decided he was not as strong a leader or as safe a bet as David Cameron.

So, little known MP Corbyn won the leadership race with nearly 59.5% of first-preference votes. He began his leadership by apologising for the Iraq war, holding a pally rally in London and promising to fight for the downtrodden. Many party supporters were hopeful; many new members signed up, desperate for victory. Then came the gifts to the Tory media: the no-tie incident, the National Anthem incident, the scepticism he expressed about the shoot-to-kill with regard to armed terrorists and, more recently, the disappearing tax return straight after he had called for Cameron to publish his details.

Rigid, awkward and with no visible signs of charisma, Corbyn is no Jürgen Klopp. Whereas Klopp inspires trust and motivates his team, Corbyn has allowed Labour to fragment. Klopp could win us cups; he is a contender for the top places: Corbyn is considered unelectable by many of his own party.

Klopp has brought a visible ferocity and  energy to Liverpool, making each fixture intense and vital. Corbyn, however, is a complete contrast. Watch him in news and interview programmes. He often mutters in a monotone, offering the same bland platitudes which might have just about held up in the 1970s and 80s.

Klopp has an in-your-face, gegenpressing, immediate ball recovery  style, a polar opposite to Corbyn’s laid-back pusillanimous rhetoric.Corbyn comes across as dull and disinterested during Prime Minister’s Questions, too. It is difficult to see how voters might invest in our new leader against the smooth or chummy styles of Cameron and Johnson. Corbyn chooses dry, tame questions, often clearly vicarious, as he has crowdsourced them. This may be, in his defence, that he wants to take the pantomime out of Parliament and this is, of course, laudable. But unless he can make his opponent acquiesce, and Cameron seldom does, he is giving the Tories a free opportunity to knock the stuffing out
of Labour and to demonstrate to voters which party has the strength and power to be the next government at the expense of Labour.

Klopp’s tactics involve pressing his opponent, never giving an inch: while remaining witty and fun. Klopp is gritty and determined. Corbyn gives more than an inch at PMQ and Cameron and his cronies take a mile!

I am not suggesting that, since Klopp is the ‘rock star’ of football management, Corbyn should be the Labour Party’s Lemmy Kilminster. But he has too much of the opposite: his calmness makes him look weak, his monotone renders him diffident. All of this makes him fair game and he pales into insignificance next to the more charismatic characters of Cameron and Johnson.And, sadly, if the Bullingdon Club charisma is winning votes, then Corbyn needs to promote a better, more plausible version of political energy  which demonstrates a self-belief and is infectious to voters, inspiring their confidence.

Jürgen Klopp will, despite any minor setbacks, take Liverpool forward towards league and cup victory. He is consolidating what he has this season and from next September, we are confident of a Champions League spot: we hope for even more victories and we believe that we can win trophies and top the League.

I  wish Jeremy Corbyn could offer me similar hope. He seems a nice, sincere guy. His road trip with Diane Abbott on a motorbike in the 1970s makes him sound like a dude and he obviously has a heart, but that will not win him elections. He is too frequently the butt of media jokes: people are talking about him in parody terms – the Jeremy Corbyn musical is an example of this –  and I see no evidence that he is uniting the party, demanding with belief and charisma that Labour moves forward  and putting in a few shrewd and effective tackles against the opposition.

To continue with the language of football, I don’t want to see Labour at the bottom of the League table; the penalty is too great. But is Corbyn able to take a leaf from Klopp’s book of management and up his game, to score the winning goal for us? I  fear that we have no really good substitutes on the bench and, in the long run, the next big title clash between Labour and the Tories will result in a hard-to-take defeat which can only suggest another season of bitter relegation.