Everyone is talking about Europe at the moment and , in particular, the referendum in June (probably). We will all be asked to decide on whether we want to stay in the European Union or not, and there are many voices out there, in the media, telling us what we should think. Most of these voices are politicians, journalists, businesspeople and a few celebrities, and most of their arguments are based on an emotional response to issues like immigration, sovereignty and the abstract notion of ‘Britishness’.

The truth is, I don’t know much at all about the real issues involved here. How many of us do? Who can truly explain the difference between the ECJ and ECHR? I know they stand for European Court of Justice and European Court of Human Rights, but that’s about it. And who knows the difference between Donald Tusk and José Manuel Barroso? One is the president of the European Commission and the other the President of the European Council: but not that way round. And what about the Commission, the Council, the European Parliament and the European Council of Ministers? How do they all affect us here in the UK? And what proportion of the voting population can hazard a guess at any of that without resorting to Wikipedia? 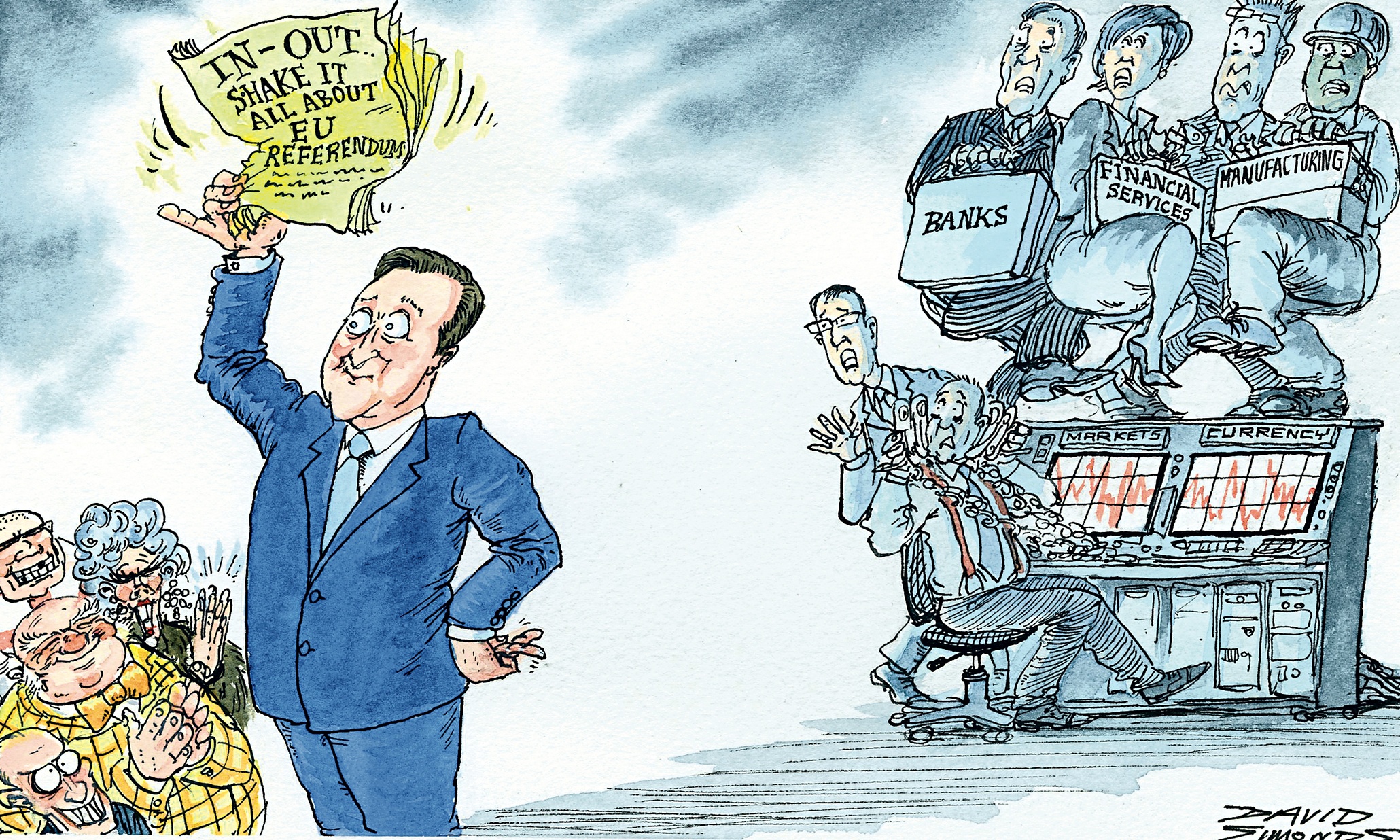 Perhaps we aren’t very well informed on European hierarchy and administration. Perhaps many people don’t want to be: perhaps the bottom line, which governs the in or out vote, is the judgement we make in the next few months about how it will all affect our lives. Perhaps that is why many of us will vote with our instinct rather than our logic, and our votes in June will, for many of us, be based on what we think we think, and not what we know to be factually true.

There are a lot of scaremongers out there who are pedalling the usual fears about Britain being marginalised and weakened within the European community. We would have leaders whom we didn’t know, whose names we might not even be able to pronounce, as opposed to those with whom we are familiar: Cameron, Osborne, May, Gove, Hunt. It is suggested that we shouldn’t trust all those European people we don’t know anything about: we are encouraged to believe that we will be so much safer with the aforementioned list of politicians whom we can rely on because we ‘know’ them. With what is currently happening in Britain in terms of austerity, the refugee crisis, the Junior Doctors’ crisis, that particular argument isn’t really working for me.

Europe isn’t perfect, what with the monetary problems in Greece, the rising right in France, Sweden, Holland: places I have always admired for their libertarian, people-centred politics. However, I consider myself European as well as British; Europe is expansive, there are many cultures, many languages, many different landscapes. What is there in Europe not to admire, not to want to become a part of, rather than retreating into insularity? Can we not be bigger, better, reciprocal and more influential in the EU rather than out?

Let’s examine the issues, briefly, which I think constitute the in/out argument in a nutshell. They are globalisation, climate change, the prospect of international co-operation and the old favourite, immigration.

There are as many British nationals living overseas as there are immigrants in the UK, and I am so pleased that the thousands of Europeans who support our ailing health service are here, not to mention the other industries so many people work for so tirelessly. I also admire Yvette Cooper’s stance on the issue of refugees, demanding a humanitarian solution and offering leadership within the EU : ‘A quota system across the EU is not right, but there has to be a coordinated plan across different European countries. Historically in big European crises Britain has provided leadership.’

Many people have been encouraged to develop fears about immigrants, that somehow their presence in Britain will mean that they receive benefits of housing and employment or financial support which is somehow otherwise reserved just for British citizens. I don’t see this as a realistic equation. The whole topic of immigration may well be one we share responsibility to solve and, to that end, it is better to resolve it as part of the EU.

Increased international economic integration, or globalisation, is a central issue for many people in terms of the in/ out vote. EU firms receive better opportunities in new and expanding markets and sources of finance and technology, and consumers can access a larger variety of goods at lower prices. This offers potentially significant gains if we are in the EU, with higher levels of productivity and  wages.However, many British people worry about the potential for job losses and lower wages or poorer working conditions.Again, perhaps we need to be in it to influence and change the economic situation to benefit our workers in Britain.Exactly the same is true of climate change: it is a huge concern for all of us, and we can only make things better with a concerted European effort based on a widespread agreed action plan, generated expansively.

It is the possibility of effective international cooperation which makes staying in the EU a rational argument: the idea that Britain can be part of a bigger group and have some influence, perhaps we could even offer strong leadership within the union, making the most of the potential for collaborative research, invention and innovation which could exist across the European community and benefit us all.

A slightly separate point about a possible result of the UK leaving the EU is that it might mean there’s no UK at all. Scottish Nationalists, still enjoying electoral hegemony and likely to extend it in May, would use a British exit from the EU to demand another referendum, one which -under such circumstances – they might well be likely to win. Are ardent Eurosceptics really willing to risk Great Britain fragmenting in order to break away from the European Union?

Gordon Brown, whom I admire for many things, including his his succinct comment that ‘we spend more on cows than the poor,’ said it perfectly in his article in The Guardian when he warned ‘leaving Europe to join the world is really the North Korea option, out in the cold with few friends, no influence, little new trade and even less new investment.‘

I stand with Gordon on this one. My vote will be a ‘Remain’ vote and I will end this article with a couple of interesting quotations from current political figures who have expressed  views on European membership:

From Nick Clegg: ‘The UK is not going to leave the European Union. Of course not. We are inextricably wound up with Europe. In terms of culture, history and geography, we are a European nation.’

From David Cameron: ‘After the Berlin Wall came down I visited that city and I will never forget it. The abandoned checkpoints. The sense of excitement about the future. The knowledge that a great continent was coming together. Healing those wounds of our history is the central story of the European Union.’

From John Hutton, former Defence Secretary : ‘Effective regulation at the European Union level can make a massive contribution to achieving our shared goals of improving competitiveness, jobs and growth.’

Inside Europe we can be part of something powerful: out of the EU, we might turn into Little Britain.