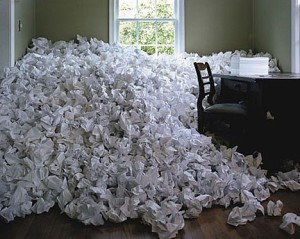 I’ve never had Writer’s Block. Instead, a more sinister affliction has taken hold.

I know many writers who claim to have had ‘Writer’s Block’. They sit at the computer and stare at the screen and mutter ‘Oh, what can I write?’

A day goes by and ideas don’t arrive, and they go for a walk in the fertile English countryside, the wild and windy moors, the wide open spaces which create wide open spaces in the mind, in the creative centre behind the eyes. Still nothing comes. They are back at the computer again and try really hard, and in two hours they have written two sentences, maybe less. I believe this is how Writer’s Block goes. It must be horrible, but apparently the block or blanket of darkness or whatever it is which prevents the writer from writing lifts eventually and our trusty author is back on track, creating killer phrases.

I have never had Writer’s Block. I have the opposite problem: what could we call it? Writer’s… effluence? Give me an idea – any idea – my mind is full of them- and I can sit down and bang out 2000 words of something in an hour or so which, left to simmer and returned to later, can be edited or used as a good starting point. It is not difficult or unusual for me to have several projects on the go at one point. Take right now. My word page is an Aga of ideas, with seven tabs bubbling away. There’s a poem, there are three short stories, a research page and two early novel ideas, both of which are about 5000 words long.

I have a case of Writer’s bleak.

No, Writer’s block isn’t my problem. But I have just encountered a new problem of my own, which I will need to rectify. Let’s call it Writer’s bleak. Yes, that’s it: I have a case of Writer’s bleak.

Let’s make a hypothesis. The yo-yo goes up, comes down, but can be jerked up again. The sun shines, then it rains, it’s windy, it freezes a bit then the snowdrops and crocuses come out and the sun shines again and spring is here. In other words, a life philosophy might suggest that after the bad comes the good: you have to have the negative to realise the positive. So, that being the case, a bit of Writer’s bleak will lead to more cheery writing soon.

I think I should explain Writer’s bleak first. This week, I was asked to write a short story which included a conversation between people of different age groups. I wrote one in which a mother spoke to an unborn child before a miscarriage. I thought that was too bleak, so I wrote another in which drowned children spoke to their dying mother. Bleak. One of my novel ideas is about abuse of women: the other deals with neglect and anger. Bleaker and bleaker. I wrote a short story which had to be about food and I ended up writing about the holocaust and the fact that no grass grew in Auschwitz for the starving inmates to eat. Bleakest. It appears that, whatever I write at the moment, it’s not very nice.

I know I have had critics in this area before. I wrote a story about Cinderella after the fairy tale ends and explained how empty her marriage had become. A fellow writer called it ‘horrible’: another said it was ‘Carter-esque’ (which is an incredible compliment!). It was good enough to be published.

Another story dealt with a young man’s bitter hatred for his mother; another dealt with a boy who was in love with his abusive teacher. Both published. Both bleak!

I wake at night excited by new ideas: maybe that’s the problem. Maybe my ideas need to arrive in the day time, when I am walking with gambolling lambs, riding a horse, strolling on the beach, hugging the cat. Maybe then I can get rid of my bleak writing habit?

Perhaps people revel in the bleak, in the Schadenfreude safe place which the reader occupies. It is always difficult to talk about the ‘reader’. I know a talented writer who creates brilliant pornography: he is the master of it, not only in his shocking ideas but also in the clever way he writes it. To be fair to him, he can write anything, but I have seen the detritus created by the right genre read by the wrong reader. I have two friends who write fantasy and YA: I marvel at their skills, but they both have the capacity to be a little dark. Dickens was bleak. Hardy was bleak. Bronte was bleak. Beckett was bleak. Orwell- Orwell !– was bleak. So why am I beating myself up about my bleakness?

My novel, ‘Older, Wiser, Wilder’, the first one, the one which is completed and out there for representation, is not bleak. It is uplifting, a celebration, a demand for recognition and for life to be lived, to be enjoyed and for chances to be taken. The pages are packed with humour, mischief, a bit of third age iconoclasm. Not much bleakness: even when there is tragedy, the novel bursts with new optimism. So what has happened to me? Why am I so bloody bleak? I am a happy person: I am annoyingly positive, I exercise every day, do yoga, meditate, run around in nature like a Pantheist. I am a Master Reiki healer. Why so bleak in my writing, then?

Maybe there is a market for bleak? The Bleak Market.

Perhaps it is the darkness of winter which brings out the bleak in me? Perhaps as the sun shines and the earth warms, I will lose my Writer’s bleak and start to write about love, joy, success, fluffy bunnies? Perhaps my field of vision will widen and I will see beyond the death and despair which clogs my current writing.

Or maybe I should just go with it. Maybe there is a market for bleak? The Bleak Market.

Or perhaps I should simply stop worrying about it and get on with my writing. There will always be good stuff, better stuff, and stuff which is best filed away for later. I am lucky to be prolific: I have never had writer’s block.

I think that’s the answer. Just keep on writing, whatever. It’s all just another stage in the turning pages of a writer’s life.

I’d welcome other’s views on the subject but, for now, bleak is beautiful.

3 thoughts on “Writer’s Block? No way! But is this even worse?”