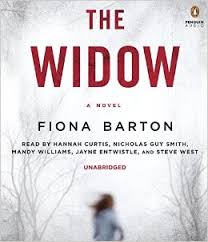 I’ve never been a real crime novel fan although I did enjoy Into the Fire by Manda Scott, mainly because of the sustained tension and the gripping and likeable characters. I heard about The Widow from Madeleine Milburn at a writers’ conference and she lauded the book because of its immediately interesting and arresting voice. The widow, Jean Taylor, is the only character who speaks in the first person although there is a roving perspective from the reporter to the detective to, occasionally, the victim’s mother and, once, the husband. The use of changing narrator, first to third and character to character makes the book edgy and interesting and sustains the tension. Fiona Barton, the novelist, has a background in journalism, so the reader is in safe hands.

The premise is a missing child and the suspect is Glen Taylor, Jean’s smug husband. Jean is passive, possibly even browbeaten, yet we suspect that she knows more about Glen’s suspicious behaviour than she admits. She seems to be a traditional, loyal wife but her admiration for Glen is occasionally interspersed with phrases like ‘No more of his nonsense,’ which makes the reader wonder if she knows more than she is telling the police: she may even be complicit. We don’t find out until the end of the novel and one of Fiona Barton’s strengths is that she keeps the tension pulsing until the final pages.

Jean is not an interesting character outside her role of widow:  she initially offers nothing but tacit support of her husband until her final rebellion. She is repressed and weak, but there is always the sense that she might be stubborn underneath and there may be another side to her. By the end of the novel we know what part she has played in the story of Bella’s abduction, but we do not understand much more about her as a character, other than her incompleteness and her dependence.We don’t discover if Glen has anything to do with the missing child, or what may have happened to toddler Bella, until the final chapters but Fiona Barton is clever in her manipulation of information, detail and inference, which makes for a compelling read.

Jean’s enigmatic character, and the fact that she isn’t really compelling except for her knowledge about the her husband and the crime he may have committed, is perfectly balanced by the relationship between the reporter, Kate, and the detective, Bob. Both characters retain the archetypal attributes a reader might expect in both professions: Kate is manipulative and cunning beneath a sheen of empathy and Bob is determined, tough yet conscientious and all-heart. They share motives but their methods are different and there is an interesting professional symbiosis between the two characters as the novel progresses.

Barton builds the tension perfectly and, as each perspective changes, we gain a full picture of the impact of Bella’s disappearance on all the characters’ lives. Bella’s mother, Dawn, develops from a distraught, struggling single mother to a media-savvy campaigner, and her metamorphosis is credible.

Despite all of the characters being exactly what you would suspect under the labels headlining each chapter – The Widow, The Detective, The Reporter, – Barton succeeds in making the novel harrowing and it is a gripping read. I think this is because the story is about a snatched child and it is the pathos and the concern hanging over Bella, contrasted with the buzzing media, the blustering cops, the panicking mother and the insidious denials of the suspicious husband which make us want to read on to the end.

Madeleine Milburn is right. The different voices, especially that of Jean the widow, who is placid,  enigmatic and wilfully ignorant, carry the story along at a fast pace and make the tension work well. The through-line of Bella’s disappearance is intriguing. Barton has been bold in her use of a stolen child as subject matter, and the inference of what might have happened. It is simultaneously unpalatable and yet consuming for the reader.

From reading The Widow, I learned that characters’ perspectives and voice can propel a novel and make it captivating, as can a theme which resonates with public interest. The Widow didn’t really need stronger or more interesting characters, although I looked for them. The main protagonists were pawns in a game of mystery and crime detection and what really catapults the story from chapter to chapter is the compulsion to find out what has happened to little Bella. We hope it will be alright but we fear that it won’t be. Jean the widow is the key to the answers and her calculated silence  must be unlocked to reveal the missing details. It is an interesting novel in the crime genre, handled with skill, confidence and expertise.