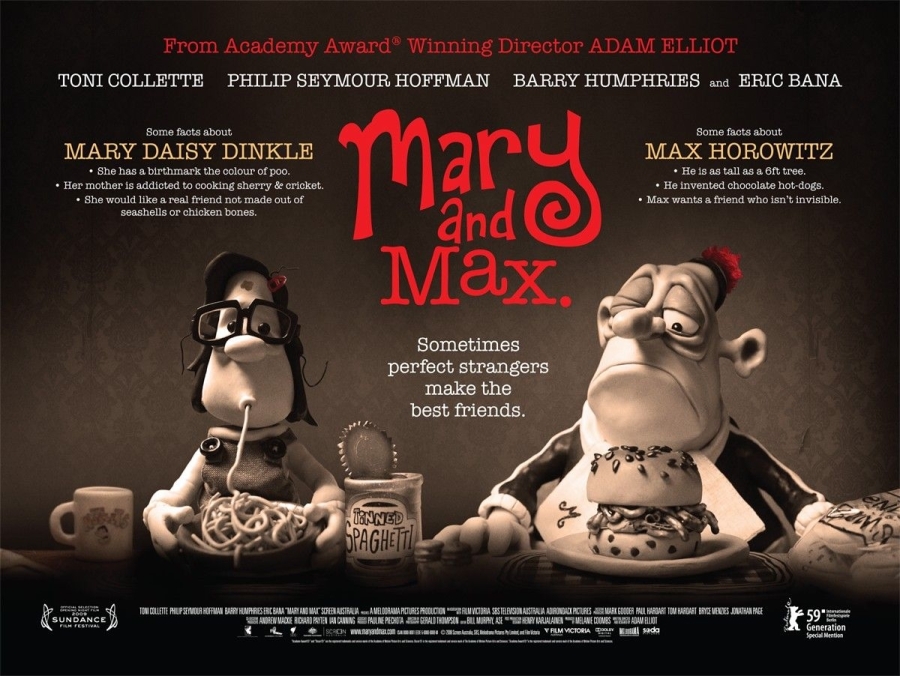 Mary and Max is a 2010 stop motion animated film by Adam Elliot. It is narrated by Barry Humphries: Mary is voiced by Toni Collette and Max is voiced by Philip Seymour-Hoffman.

Mary is a young Australian girl with a distant, overworked father and a kleptomaniac, alcoholic mother.

Mary is bullied at school and lonely. She finds herself in a post office and discovers a telephone book of American addresses. A curious child who has no-one to answer her questions, she selects a random address and her correspondence with Max begins. Their letters to each other are natural and honest. Mary tells Max about a neighbour who is agoraphobic.

He’s scared of outside, which is a disease called homophobia.

Max is a 44 year old Jewish atheist who is morbidly obese and has Asperger’s Syndrome. He is isolated and, despite having an anxiety attack when he reads Mary’s letter, he is compelled to write back to her. A bond develops, despite Max having difficulties relating to other people.

Max knew nothing about love. It was as foreign to him as a salad sandwich.

Their relationship is poignant and charming and it begins because they both have a liking for chocolate and a TV cartoon show. Max is able through his letters to explain to the young Mary that he has problems with relationships.

People often think I am tactless and rude. I cannot understand how being honest can be improper. Maybe this is why I don’t have any friends.

Their letters serve to develop their characters. Mary is unsupported at a time in her life where she is looking for a strongly influential role model and, in Max, Elliot is showing us a caring and heroic individual who is thoughtful and generous, even though he is misunderstood and marginalised by society.

I was born Jewish and used to believe in God but I’ve since read many books that have proven God is just a figment of my imagination. People like to believe in God ’cause it answers difficult questions, like where did the universe came from, do worms go to heaven and why do old ladies have blue hair. And even though I’m an atheist, I still wear my yarmulke as it keeps my brain warm.

Max has a breakdown: he is institutionalised and his correspondence with Mary stops for several years. Then on his 48th birthday, Max’s fortunes change with a lottery win.

Not much has happened since I last wrote except for my manslaughter charges, lotto win, and Ivy’s death.

Mary has grown up, married childhood sweetheart Damien (Eric Bana); she goes to university and writes a book on Asperger’s Syndrome with the intention to cure Max. He feels misunderstood, exploited and rips the letter M from his typewriter.

The rest of the story line is not to be spoiled for people who haven’t seen the film, but the characters’ lives take unexpected turns and the tension is palpable.

At the end of the film, Mary and her baby visit Max in New York. The ending is surprising, powerful and  the music Que Sera Sera is used as an ironic semiotic for the unexpected things which happen in life.

The impact of Mary and Max is twofold. Firstly, it is the intention of Elliot not to avoid the important discussion of issues such as loneliness, childhood neglect, alcoholism, depression, suicide, anxiety, isolation and the importance of friendship. Asperger’s Syndrome is dealt with in detail and, although not everyone with AS will manifest all of Max’s problems, the film serves to show clearly that autism and other ‘disabilities’ are in fact not the lens through which we should see the whole individual, but that the individual should be accepted wholly for who they are. Max writes to Mary:

Dr. Bernard Hazelhoff said if I was on a desert island, then I would have to get used to my own company – just me and the coconuts. He said I would have to accept myself, my warts and all, and that we don’t get to choose our warts. They are part of us and we have to live with them. We can, however, choose our friends, and I am glad I have chosen you.

The second strength of Mary and Max is the remarkable impact of the medium of stop-motion animation which renders the film both informative and funny. The characters are beautifully created and the use of music and the witty script are completely effective and the rapport between all the characters is bittersweet and heartwarming.

Taken for what it is, an animated film which has a message but is, at the same time appealing, moving and thought-provoking,  Mary and Max is a really good film to be enjoyed and treasured. It is certainly not just for children.