Stephen King famously said ‘Kill your darlings, kill your darlings, even when it breaks your egocentric little scribbler’s heart, kill your darlings.’ He followed William Faulkner in this idea: in order to become the greatest writer you can be, you must get rid of all your self- indulgent passages and your precious, unfeasible characters for the greater good of your writing. Cutting cluttering lines and plot points which don’t work, even if you are attached to them, must happen if the overall effect is going to be improved.

Other writers have agreed with the ‘darlings killing’ theory before King: Chekhov, Wilde and Ginsberg, to name three, believed in making writing as readable as possible and it’s a mantra repeated through gritted teeth on writing courses, as if some writers want to hang on to their favourite bits at all costs and to hell with reader ease and enjoyment.

And really, that’s it in a nutshell: the reader’s enjoyment. It’s not about writers needing to be guided towards good writing by warning phrases of violence and murder and frequent reminders of psychotic attachment or egocentric hoarding of verbosity, it’s about the reader having a good experience when he or she reads your book. That is what needs to be uppermost in writers’ minds at all times.

Not that I haven’t edited my my work with a scimitar, slashing away at chapters which hold no tension or characters which I suspect might be a little bit predictable. I am quickly bored when I read writing which is indulgent. I try not to be scathing of other people’s work – all artists have had to nurture their babies before whooshing them down the plughole – but as a writer and a reader, I am always analysing what works and why and how, and what doesn’t. I often read a book or watch a film and if there is a lack of necessary action or tension, or a character which has no depth or extension, then it’s probably not for me.

My  big love is subtext: I don’t want a character told to me. I want to work at it a bit, make mental leaps, discern or work out from hints and signposts, and become part of the writer’s way of thinking. I know readers who don’t want to do that. I have heard ‘I want to be told all about the character and to know all the  details,’ and this brings me to the point of subjectivity.

Recently, I had an emailed refusal for a submission of my novel, which I’d sent to a top agent. I could have hugged the lady who replied. ‘You write so well!’ she told me and then explained that her agency couldn’t take much at the moment but I was sure to find a home for my novel as it was really interesting. As a cynical creative artist, I could have written her comments off as a polite ‘get lost’ but these wonderful professionals don’t do that. It’s a busy industry and a no-nonsense one which places novels purely for business and with such a refusal I know I will find the right agent in a subjective industry where subjectivity is really what it’s all about. I recently blogged about two trending top-selling ultra-popular books I did not enjoy. And while I admire anyone who can write 100,000 words and then rip it to bits as they edit, as I have just done, there will always be novels I love and ones I just haven’t bothered to finish.

By stripping novels of indulgence, I don’t mean that sentences should always be kept totally simple, although I do believe that adjectives, adverbs and similes should earn their place. Is it a David Mitchell character, a writer called Crispin, who says any simile which doesn’t score at least 4 out of 5 should be edited out? Clean writing is best but it doesn’t have to lack flair.

I work hard at fitting my narrative to characters and theme. I recently wrote a short story called ‘The boy who climbed telegraph poles’ and it needed a simple style because of the character of the narrator, a protagonist talking about her autistic grandson. However, I also wrote one called ‘Whales and Whispers’ where the protagonist was a young man who had left jail and was travelling north, and I wanted to show that he had  a love of nature which seeped through his language.

I am really lucky to have clever friends, ex-MA students and a weekly writing group complete with tutor on whom I try out my ideas, and I continue to learn about what works and what doesn’t, although I keep a watchful  eye on subjectivity. I’ve learned that criticism is helpful but not everybody will like everything. One story I had published was first hailed in my writing class by another writer as ‘Horrible’ and I was thrilled to get such a positive reaction. She was right, though: I wanted it to be horrible.

Not everything we write will work. Not everyone will like what we write, and I don’t expect to enjoy everything I read although I always start by wanting to enjoy it. In a subjective industry, however, it is still vital to put the reader first and not to covet any ‘darlings’ which we writers want to hang onto with sentimental attachment.

So perhaps it’s better not to have ‘darlings’ at all in the first place. Perhaps it’s better to have ideas and characters and words which are simply servants of the reader, which are either disposable if they don’t work hard to create reader enjoyment, or employable and potentially useful, after a good stiff edit, if they do. That way we don’t need to kill them, just make a judgement about them and then, if they are any good, write them down for pure pleasure. 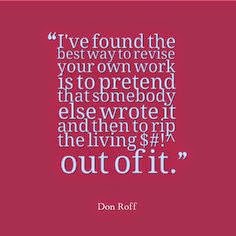