In a previous blog, I hinted that Shakespeare’s plays may have been early soap operas for the thousands of groundlings who cheered and hissed and threw missiles at the stage when the tragedy was notched up a gear. They would have paid a penny, these butchers and tanners, seamen, shop keepers, wig makers, to stand in front of the stage. That was almost a day’s wage in the 1600s. They were a boisterous bunch, too: often loud and hot- tempered, they would often heckle the actors and they clapped and booed and jeered as they thought appropriate. In 1629, a French company were jeered and ‘pippin pelted’ because they dared to use real women for the female roles. They would arrive late, leave whenever they liked before the end and at times, the groundlings would become so affected by the action, they even joined in, climbing on the stage.

That’s not too far a cry from our current response to soap operas – how many of us have never shouted at the screen when the characters are in a high drama situation, our suspension of disbelief going into overdrive?

There have been moments of soap madness which have combined excellent script writing with sharp acting performance and the result has been the creation of household names and momentous drama situations which stay with us to this day.

Remember Brookside, when Mandy Jordache killed bullying hubby Trevor and Sinbad put him under their patio, then Jimmy Corkhill had to dig him up again to retrieve the wedding ring? Remember the best row ever in the shocking climax  in Eastenders when the Slater girls were screaming at each other and Zoe yelled at Kat ‘You’re not my bloody mother!’ and Kat replied ‘Oh yes I am!’ 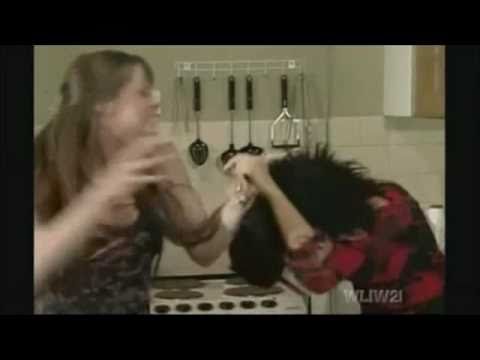 We love the pantomimic qualities of soap; the creation of heroes whose triumphs we can hope for, and villains whose vileness and knavery we can loathe and despise. Put the baddies and goodies together and drama will develop. There was the Krystle and Alexis catfight in the lily pond in Dynasty where we all goggled at the spectacle of kicking legs and wigs and wet dresses on the telly before bursting into laughter. There was Den and Angie’s Christmas divorce and the awful fire in Emmerdale which killed Sarah Sugden and the flying window, roof tile, biscuit or whatever it was that sent Tricia Dingle to an early grave. But amid the riots and romance, we have to care about what will happen next.

This brings me to the point about modern soaps and perhaps the competition between them for viewing ratings, which may cause the plots and the characters to be strained to such an extent that they defy belief. Once upon a time, in the sixties, seventies and eighties, soaps were mini kitchen sink Dramas and a good place for brilliant actors and promising scriptwriters to cut their teeth on new, edgy stories. Soaps boasted characters we could believe lived next door to us, and we treated them as if they were neighbours, we were concerned about their lives. Stan and Hilda Ogden and the Mitchell brothers had a certain quality we both loved and hated: they were flawed heroes and yet somehow likeable. Now we are treated to characters who may be down on their luck, may be troubled, may be bankrupt or breaking up but they still manage to find their way into the Rovers for a pint or a pie and a pastry in  Roy’s Rolls, and how they keep managing to slide out for lunch in Nick’s trendy bistro on the wages from a part time job in Underworld is mystifying.

We expect soaps to bring a bit of drama into our lives and I’m sure we have all had moments where our own lives have roller coasted out of control a bit, so we expect to be staggered by the events which play out on our screens. But who would choose to live in Weatherfield, where minibuses crash and boozers blaze while Fizz gives birth seconds after the impact and Leanne marries Peter at his hospital bed moments before she’s told to fear the worst.

And in terms of romance, does anyone look any further than their next door neighbour for a life partner? Moreover, why does simpering Tim stay with silly Sally? Why would tough business woman Carla pick boozed up and bankrupt Peter Barlow, who cheated on her while she fell into an alcoholic stupor on her wedding night? Are we expected to believe that any man on earth, let alone the talented if bland Robert would cope with Tracy the conniving, lying and duplicitous murderer?

It’s good that Corrie has defied the trend to make all the storylines about misery and death, and the warm humour which seeps into characters’ rapports can be a step away from empathy and likeability, as seen in the Steve/ Lloyd friendship. But what about the Platts? I laughed out loud at the ridiculous comments and death- puns which kept coming through the family mouths as Gail arranged the furniture in her granny flat while druggy Callum was cold beneath the concrete floor. I am guessing the body under the annexe story is one which will keep bubbling for a while, culminating in a massive showdown scene before the actress who plays Kylie gets arrested and goes off on a real maternity leave? Or perhaps Callum will come back from the dead, as Dirty Den did on several occasions, and claim his new son Harry? Or maybe there will be a haunting, or they will wake up and it was just a dream!.

There have been some powerful and impactful moments of drama, such as Steve Mcdonald’s brush with mental illness, well scripted, and sensitively performed by an actor who had previously specialised in being a feckless barman who told superficial jokes. It is impressive when we realise we are in the company of great actors who are capable of startling performances, such as Katherine Kelly as Becky Mcdonald, who had us convinced that, despite her shady past, she was a character with depths of integrity and altruism.

But too often, the characters and storylines are a little weak and implausible, such as Maria’s pointless marriage to Pablo, which then causes her to dress like a lion so that Luke acquiesces with an engagement ring, without giving her betrayal more than a second thought. Even serious and ground breaking story lines, such as Phelan’s rape of Anna or Izzy’s sourcing of cannabis to cope with her everyday pain have not yet reached the emotive impact which will make an audience think about the real repercussions. Brechtian Lehrstücke or learning plays, where the characters and plots imitate life so that an audience can use logic to make decisions and form conclusions about how society works is often an important part of soap stories, but in these cases we the audience are not being made to care enough about the characters; their agonies, their plights, their dilemmas are being superficially presented without the  real jolt of empathy or tension which will make us react.

Remember the Free the Weatherfield One campaign, and the  signs which went up all over the UK asking for Deirdre to be released from prison when she was wrongly jailed for theft? Tony Blair backed it, t-shirts went on sale, it was a huge talking point nationally. Yet Gary’s arrest and Tony’s death and Phelan’s petty crimes in the community centre pass almost unnoticed: Sally, Norris and Dev remain comic characters and the romance triangle roller coaster between the bullying Caz and the star cross’d Kate and Sophie has raised barely a sniff of compassion.

Perhaps what we need is characters whom we can care about, who are less superficial, and that is difficult to achieve now in the mad soap-opera world of a tragedy a minute and a death,birth or divorce every few episodes. What we need is a dilemma we can believe in and characters we can commit our allegiance to.How can we care about characters who are underdeveloped and engaged in superficial story lines? I have seen Anna do her pained expression more times than I want to, and the result is that I don’t see her problems as interesting or her relationship with or Kevin as a venture I really care about.

Give them all something heroic to do, give them some depth and purpose. Create more characters like Eva Price. Her storyline showed her saving the enslaved Marta, despite her determination to do the right thing getting her sacked from Underworld. The situation  was far fetched but worked due to her performance, where she mixed humour and determination with gritty, gutsy action and a few human mistakes which make the drama credible. Eva the Diva has a heart: she is flawed and funny and her character is being constantly developed, due to the actor’s ability to create subtext and to show a multi-faceted personality. If only this were true of the downtrodden Tim or the whingeing Norris or the miserly and boring Dev. Give the characters passion, a heart, some credible layers and some honest action.

Strong story lines we can believe in, characters we can understand and get to know and like, a sense of commitment to backstory and action is what soap fans now need. There’s a lot of montage, a brief glimpse of a character emerging, a facial expression, a moment, and then we move to another transitory and peripheral storyline. We need some grit without the misery, some drama without the sense of déjà vu  accidents and incidents. We need to start to care again about our characters and believe they are real, rather than the current situation where Martin is cracking bad jokes about  dead, concrete- embalmed Callum in front of  gormless and gaping Gail while Sarah-Louise is having hysterics at the baby’s baptism.

Otherwise, the alternative is that reality TV will become the new soap opera. I mean, is there anything more exaggerated, ridiculous, mercurial and episodic than the life of the Kardashians? We soap-opera groundlings are always going to be more than capable of shouting abuse and throwing a few pippins at the screen. Moreover, it is very easy to change channel, watch the football instead or just take ourselves off down our local pub and have a little life action of our own.