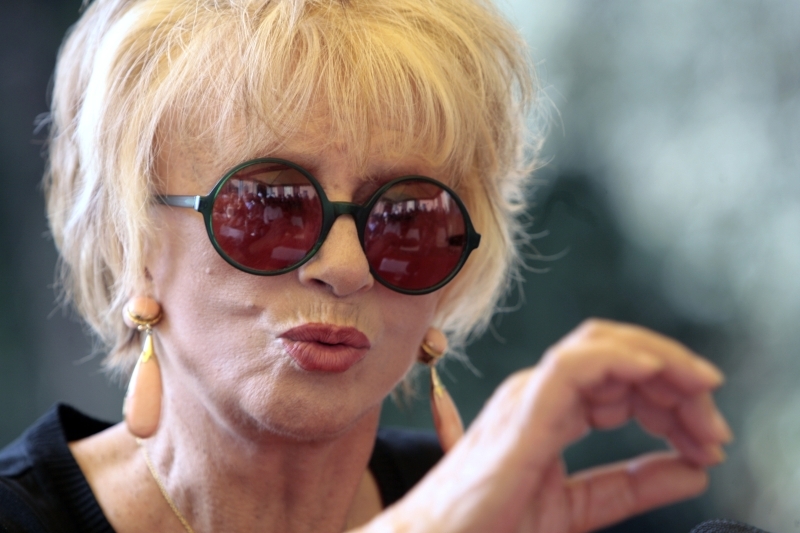 When Franca Rame died in 2013, aged 84, the Italians at her funeral remembered her by wearing red clothes with red roses,as she had requested. She was a superstar, grieved in much the same way as recently departed cultural icons have been remembered after their deaths, surrounded by tributes and superlatives.

In this country, Rame’s husband and professional partner, actor-playwright Dario Fo, is much better known than Rame. When Fo received the Nobel prize for literature in 1997, he hailed Rame as his muse and shared the medal with her.They gave most of the Nobel money to charity.

Fo is well known for his political plays, ‘Can’t Pay, Won’t Pay’ and  ‘Accidental Death of an Anarchist’, which featured roles for both himself and Rame. In 1970 they co-founded their own militant theatre group, La Comune, in Milan.

Franca Rame was a superb actress, a feminist and a champion of the underdog. She was never afraid to speak out against injustice. She worked for Soccorso Rosso (Red Aid), to collect funds for the families of political prisoners, who were being mistreated in Italian jails.

She said in 1984: “I’m not defending prisoners because I think they’re poor helpless beings who have been maltreated by an evil society. I just want to defend their right to dignified human treatment.” Such activity made it initially difficult for her and Fo to be given visas to visit the US.

Rame was a seminal writer and great performer of monologues, and again her characters and performances reflected her political convictions.In 1977, she put the sketches together into a one-woman show, ‘Tutta Casa, Letto e Chiesa’ (It’s All Bed, Board and Church).

It became a favourite text for feminist theatre groups and was performed (as Female Parts) by Yvonne Bryceland at the National Theatre in London in 1982.

Her monologues, ‘A Woman Alone’, are outstanding to watch and to read; they range from deeply serious to the extravagantly comic and grotesque, all comments on the female condition. Rame said, ‘The pieces are comic, grotesque, on purpose. First of all because we women have been crying for two thousand years. So let’s laugh now, even at ourselves.’

It is impressive that Rame can use writing and the stage as a platform for catharsis and political injustice. In 1973, Rame was kidnapped , tortured and raped in a van by neo-fascists. They abandoned her in a park, after dark. Ten years later, she used the experience for a monologue, Lo Stupro (The Rape), which featured in a 1983 workshop she did at the Riverside Studios in London.It can be found in her collection, ‘A Woman Alone’ and is a harrowing depiction of her ordeal, written in the first person.

In 2006, Rame surprised everyone by standing for parliament. She was elected to the senate for the populist Italia dei Valori (Italy of Values) party, a enemy of Berlusconi’s party, set up by former magistrate Antonio Di Pietro.

For the last four decades of her life, Franca Rame fought against against rape culture, always insisting that hers was never a special case. She insisted that rape is always a crime of hatred, about power and control.

Dario Fo is still alive and he is an active participant and campaigner on various political, social and cultural issue. One of his famous quotations about his work is ‘With comedy, I can search for the profound.’ If he was the people’s court jester, then maybe Rame was behind him, pulling strings or in the wings, prompting. But her work deserves its own place in the limelight. She should be remembered for her incredible contribution to political and feminist theatre.

2 thoughts on “Franca Rame: behind the great man there was a superstar”